Attorney James M. Ruppert now has a decade under his belt representing everyday people in personal injury, workers' compensation, medical malpractice and nursing home abuse/negligence cases. The best thing he offers his clients is an incredible understanding of how to handle every issue they might face following an injury. Due to his lifelong dedication to his job, he can remove most of the worries and concerns that a person feels after injustice or wrongdoing. For this reason, he is the youngest partner in the firm's 70+ year history.

James M. Ruppert is a great trial lawyer. For those that don't know, a trial lawyer is an attorney that goes to Court for his client when the insurance company doesn't act as it should.

What makes James one of the best at his job is multifactorial. First, he knows the law and the strategy to leverage his clients' interest. Second, he knows the doctors and the medicine that is necessary to do away with opinions made by the doctors hired by insurance companies. Third, he loves to and regularly tries cases when most "trial attorneys" dread the work or fear the occurrence of a trial. Fourth, Mr. Ruppert has met many of the judges that preside over his clients' case because of his extensive time in the courtroom, and these judges respect James' experience and honesty in handling these cases. Fifth, defense attorneys would rather not litigate a case against him because he outworks them and forces them to actually take care of his clients. Sixth, Mr. Ruppert is more prepared than his opponents, making sure he has all facts that support his clients' cases. Lastly, Mr. Ruppert is very efficient in resolving medical bills, liens and subrogation issues that result in thousands of dollars extra to his clients.

James grew up in Alton, Illinois. He learned the value of hard work at a young age by working for his father's construction business from age 7 to 20. He graduated from Southern Illinois University School of Law following his completion of undergraduate schooling at Western Illinois University. He resides in Mt. Vernon, Illinois with his wife, Katie, and daughter, Josie. He also has the worst guard dog, a rottweiler named Zeus.

Hassakis and Hassakis, PC, has truly been a huge blessing in my life providing great service and professionalism. I have personally sent family and friends to Hassakis and Hassakis. They as well were very pleased with the handling on their case. A huge thanks to James Ruppert for all you’ve done for me, my family, and my friends! 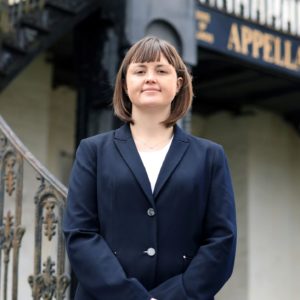